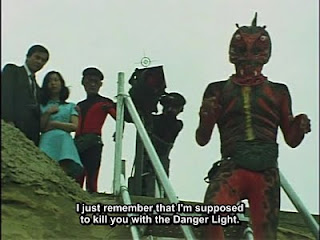 This is a strange one, folks.  The writers, obviously faltering for storylines that DON'T involve Hiroshi Fujioka, have decided to rely less on stock footage (except for that scene with Hongo in the blue racing jumpsuit...  again!) and more on the amazing supporting cast.  The previous episode could have been called "Kamen Rider:  Monster Incorporated," while this one seems more like "Ruriko Rider!"

What we have here is a story about Ruriko that fails as a Kamen Rider episode, but still manages to be incredibly entertaining.  It feels more like a side story than an episode of this series.  Kamen Rider is barely in it!  But, while it is a very flawed and choppily edited episode, it is a ton of fun to see Ruriko on the prowl.

And we get to meet one of the goofiest, most lethargic monsters ever.  Every minute he's on screen is a treat, if only because he's so bizarrely deadpan.
Anyway, enjoy the episode.  Have a happy memorial day, and look forward to next week's episode:  The last Hongo episode for a good while!

Translation note:  Nobody knows, in any language, what a Gelas is!  If you have any ideas, let us know.  It could very well just be a Toei make-em-up word that we'll see more of as the episodes progress.
Posted by Steel A Jeeg at 3:44 PM