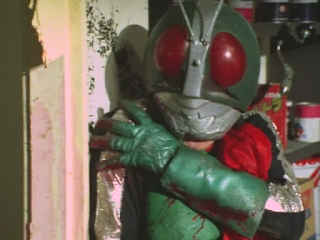 This episode has one of my favorite Shocker Cyborg name puns, a vicious knife fight, killer ants, and a string of fart jokes.  What more could you ask for?

It's a fun coincidence that this episode is very Taki-centric, because earlier this month was actor Jiro Chiba's birthday.  Although he retired from acting in 1982, he has nothing but good things to say about his time in Shotaro Ishinomori's universe.
He was born Mitsuho Maeda, and after Kamen Rider he would go by the name Jiro Yabuki, only to re-adopt the name Jiro Chiba again as of 2006.  Jiro is a bit of action star royalty.  His brother is the baddest hero in the whole damn town, Sonny Chiba.  The Street Fighter, Hattori Hanzo.  But Jiro has a pretty impressive list of credits too.  He was the trusted friend and comrade to TWO Kamen Riders, a detective with a good heart but lot to learn about equality in Robot Detective K, the human ambassador to the demons with the hearts of gold in Akumaizer-3, as well as appearing in the Bijinda arc of Kikaider 01.  He also guest starred alongside his brother in the definitely not for kids cult samurai film Makai Tensho, directed by Kinji Fukusaku of Battle Royale fame. And not to mention an impressive list of action movies and detective dramas.
Although he hasn't acted since 1982, he has appeared in interviews where he has had nothing but positive things to say about his time on Kamen Rider.  In 2006 he appeared at an event for Kamen Rider's 35th anniversary, and has recently met with Takeshi Sasaki to reminisce about their roles as action heroes, and revisiting some familiar locations from Kamen Rider's history.

Also celebrating a birthday this month, although unfortunately posthumously, is the big man himself; Shotaro Ishinomori.  His legacy is more than well known, but we'd still like to talk about some of his contributions to tokusatsu, comics, and the influence he had on many of us.  But we'll save that for the next post!

So enjoy the episode, come back soon for more trivia, and stay tuned for more episodes coming much sooner than our recent erratic schedule would have you expect!
Posted by Steel A Jeeg at 9:13 PM 11 comments: 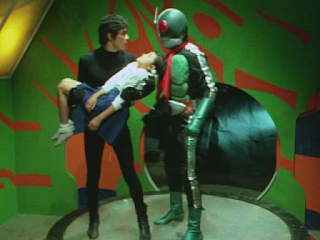 In case you deliberately skipped episode 39 to watch the series in order: We've polished our episodes up a little with new typesetting and new timing.  But now we're sprucing them up even more, thanks these awesome new video encodes thanks you our friends at Bunnyhat Raws!

In this episode, Shocker has a dastardly (and highly improbable) plan to blast Japan in twixt with a massive nuclear bomb.  And also mind-wipe a brilliant inspector that's on to their twisted schemes.  And also kidnap some kids, because WHY NOT.  But Hayato and Taki are there to take them down.

Stick around for one of the silliest finishing attacks in the history of the show.  It's a fairly infamous scene, if you've been around the internet.

But after that silliness is one hell of a depressing ending.

And some awesome trivia from our resident voice-master, JeffB!


This week features one of the bigger voice talents throughout Showa Rider, Ritsuo Sawa. The man has voiced monsters in every Showa series from the original all the way up to Super-1 and can be heard in other such shows like Kyodain, Chojin Bibyun, Battle Hawk, various Ultraman shows and CarRanger. In V3 he has the distinction of voicing Scissors Jaguar, the first monster to appear in that series (he also holds this distinction for Skyrider as well with ChameleonMan). As for the original Rider series, he's already appeared in episodes 6 and 27 and we'll continue to hear him throughout the series all the way until episode 82. As for his appearances in Stronger and Skyrider he appears in Stronger episodes 2, 7, 10, 11, 14, 17 & 19 and Skyrider episodes 1, 7, 19, 30 and throughout that series until episode 50.


In some site news, you may notice that all of the mediafire script links are dead.  Don't worry, we've already moved them over to Packupload.  Check the release page for new links as I get a chance to update them (this may take a while, so keep checking back!)
On that same note, we'll be updating the releases page so that all of our current releases are properly linked on there.  WOOPS~   Again, check back soon.
Update: All Kamen Rider links are up to date
Update 2: All Super-1 links are up to date
Update 3: All Decade Musical links and Hibiki scripts are up to date

Also this week, aside from our usual team (Sky79, HeatMetal, Scissors Jaguar, Steel A Jeeg, and now Bunnyhat Raws) we'd like to give a HUGE thanks to our friend Ignis, for helping us get this little propeller plane of an episode off the ground.  We'd be grounded if it wasn't for her this week!

Anyway, thanks for watching, and we'll be back soon with another action packed dose of Showa Rider justice!
Posted by Steel A Jeeg at 9:35 PM 2 comments: