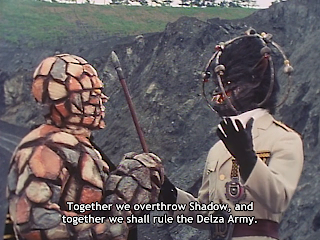 Kamen Rider Stronger episode 32:
[MKV] [Script] [MKV Torrent]
[Release Post and MP4 at Midnight Crew Subs]
Jo Shigeru has received the Super Electronic power up.  But can this new power be enough to stop the rootin' tootin' Baron Rock?  What about Baron Rock and Secretary of State Wolf together?  And then General Shadow shows up to make things more interesting... Yikes!  Things are getting out of hand for our hero.

This episode has a great dynamic going on between Baron Rock and Secretary of State Wolf.  The infighting between the Delza Army members is really the meat of these later episodes, and its a big part of what makes Stronger such a great show!

Things might also seem like they're getting out of hand for us here at KITsubs.  Well, they're not.  We're just working on a big release for our brand new series, as well as hitting some pretty cool milestones with our regular releases!  Stay tuned next week for Kamen Rider 37, and the debut episode of our new project!

PS: There was a little flub in last episode's script.  We'll release the v2 along with the batch torrent, but for now you can get the script here. [Episode 31 Script v2]
Posted by Steel A Jeeg at 10:00 PM 3 comments: