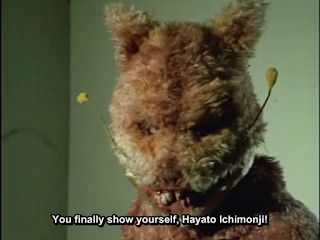 Well, that was longer than I expected!  Sorry for the delay, everybody.  Last week was rough for me.  But the rest of the team is as hard working as ever, and we have another episode for you!
In this episode, we go from location to location with Ichimonji, Taki, and the rest of the crew.  Shocker decides to mess up Taki, Yuri, and Goro's day-cation with a flying squirrel from hell!  What does he want with this experimental new fuel?  Experimental new fuel?!  It costs me forty dollars a week to fill my junky car up, and these guys are just throwing it around like it's nothing.  MAN...

So to make up for the delay of this week's episode, and the missing release from last week, we're releasing THREE new episodes this week!  Check back soon for Skyrider episode 22, and after that for Super-1 4v2.  That's the least I can do for our amazing fans.  As of this post we have 998 members on our facebook page... only two more until we're at 1,000!  You guys are the best.

Check the forums for Kou's edit of this script.  It's loaded with information, and incredibly informative about the translating process.  And it has some great cultural information.
You can also read up on what happened last week to cause the release delay.  It was a personal matter, nothing to clutter the blog up with.  But if you're curious, it's there.
Posted by Steel A Jeeg at 9:02 PM 1 comment: 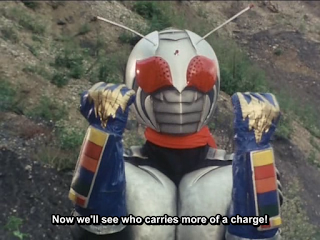 Finally moving forward with our Super-1 v2s, and bringing us one step closer to a new release, it's our version 2 release of episode 3!

In this episode, Kazuya uncovered a Dogma plot of pure opulence:  Building a city out of solid gold!  Why?  Because why not.  Can Kazuya stop Electopus and Blue Demon from stealing all of the gold in Death Valley?  And more importantly, can he concentrate on his Kung Fu with Choro's incessant whining in his ear?

Did anyone else think that Blue Demon looked familiar?  I did!  So I went and checked, and he's been in a few other Kamen Rider series.  Mostly playing villains.  The actor's name is Shinkai Jobu, and he got his start playing an extra in an episode of Kikaider.  He was also an extra in an episode of Kamen Rider V3, and a teacher in Ultraman Taro.  And he was Fire Draco in an episode of Ultraman 80.  But his most recognizable Tokusatsu role (to KITsubs fans, anyway) would be WolfMan, from episode 19 of Skyrider!  He was credited as "The man in the trench coat."  He's still alive, and he was active in TV as recently as 2005, in a show called "Party" on TBS.  His bio says that he's known as having "the natural face of a villain" in TV, but a heart of a good friend behind the scenes.  Very cool stuff!

Episode 04v2 will be coming very soon, and then we can FINALLY expect episode 05 after that.  Also, if you check our status bar on the side, we've got plenty more Skyrider and Kamen Rider lined up for you guys.  Thanks for watching, as always!
Posted by Steel A Jeeg at 5:40 PM 2 comments: 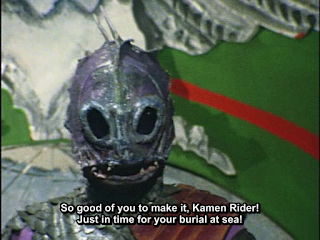 Another great character building episode for Ichimonji, as he faces off against Shocker's monster from beneath the sea!  Shocker has a plot that has... something to do with the ocean.  I think it was just an excuse for a beach episode.  And man, what a beach episode it is.  Groovy 70's ladies all over the place!
We also see Mari jealous over Taki's FBI partner.  Yet everybody seems to have forgotten about Taki's wife!  Even Taki...

And there's also a machete knife fight, where Ichimonji gets medieval on a bunch of Shocker Grunts!

This week, we've got some trivia about the episode from our main translator on this project, Sky79!

I do love episode trivia.  If anybody has any more info on any other releases, feel free to drop us a line!  We'll be sure to credit you on the front page, along with your submission.
Sorry we missed our release last week.  I (Jeeg) was feeling under the weather, so I decided to take a week off to recuperate.  But now I'm feeling much better, and we're back on track with our regularly scheduled releases.  And we're still releasing Super-1, as soon as the episodes are finished.  Expect the next V2 release to come very soon.  Thanks for watching!
Posted by Steel A Jeeg at 9:17 PM 5 comments: 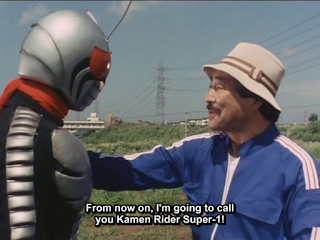 Part 2 of Kazuya Oki's origin as Kamen Rider Super-1.  The deadly Saruwatari is running around Tokyo, smashing up Dojos and picking on be-hatted Motorcycle Shop Oweners.  But Kazuya can't transform into Super-1.  What he needs... is the power of Kung-Fu!  Can he unlock the secrets of The Sincere Shaolin Fist in time?!

Last episode we met one of my favorite characters from any show we've done, Professor Henry.  He really makes an impact for such a short lived character, with his exaggerated hand gestures, and his unique line delivery.  He's a German-born, half Swedish and half Japanese actor named Wolf Otsuki (Real name, Wolf Georgi.  That's right, the WOLF part isn't even a stage name!)

He's been in a few Tokusatsu series, most notably of which is Daitetsujin 17, where he plays an evil professor, and in Kamen Rider Stronger, where he plays King Khazar.  A Middle Eastern royalty that speaks English played by a half Japanese half Swedish actor born in Germany.  Yes.  That is as fantastic as it sounds.

We're going to try to get the rest of these V2 finished out before the our next release, that way we can finally release Super-1 05.  So check back in soon!  If we don't get the V2s done in time for next week's release, we'll still have something cool for you.
Posted by Steel A Jeeg at 7:41 PM 2 comments: 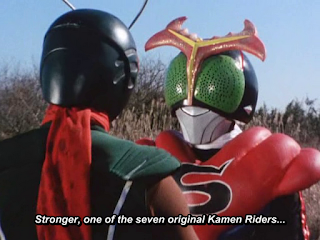 Part 2 of Skyrider's first encounter with another Kamen Rider.  Can Stronger and Skyrider stop JellyFission and RhinoDump's two-pronged attack on Tokyo?  Admiral Demon has a trick up his sleeve to make sure that they fail.  Will they be able to overcome his cunning new plan?  (Yeah, probs...)

This is also the first time we officially hear our hero referred to as "Skyrider."

Here's an interesting bit of trivia from Sky79, who found this information while researching something on the japanese wikipedia entry for Skyrider:  Apparently, Skyrider's signature move, the Rider Break (which is featured at the end of Let's Go Kamen Riders!) was written into the show because of a small accident.
It seems that Hiroshi Tsukuba's actor, Hiroaki Murakami, didn't have a motorcycle license when he auditioned for Skyrider.  He didn't even know how to ride a motorcycle.  But being able to ride a motorcycle was (obviously) required for the role, so the producers told him to try anyway.
And as the story goes, he rode the bike into a crowd of people and couldn't stop, almost crashing into a wall.  The producers, having just witnessed what could have been a horrible accident, decided that it would make a really awesome ability for the Rider to have.  So so, the Rider Break was born!

And speaking of trivia, Skyrider's training sequence here is one you might recognize.  Plenty of riders have used an aerial flip to power up a Rider Kick.  But why does it work?  Well, in the original series, the turbine in the belt powered the Rider.  It cause Hongo to transform, and it gave him more power when he's fighting an enemy.  An aerial flip spins the turbine even more, powering up the impact of the Rider Kick!  We even see this referenced in more recent series, most notably of which in Kuuga, where we get a very Showa-esque training sequence where Godai improves his own finishing move!

Sorry for being so long winded... it's been a long time since I dropped a trivia bomb on all of you!
Keep your eyes out this week for Super-1 v2s.  If I can finish them before next week's release, I'll have a brand new episode of Super-1 waiting for you!
Posted by Steel A Jeeg at 8:58 PM 2 comments: