Hayato, Taki, and Tachibana will don the most hilariously 70s disguises ever in order to track down ToxicDahlia.  And they'll finally come face to face with Colonel Zol.  It's another awesome episode, with one of the most subtly violent finales in the series!

Be sure to check out the script for some cool episode trivia.

Also note that during the eyecatch, there's no trivia.  It just has the KITsubs tag twice.  However, there IS trivia in the script!  So download that, load up aegisub (or a related program) and check out those notes!
Posted by Steel A Jeeg at 8:57 PM 13 comments: 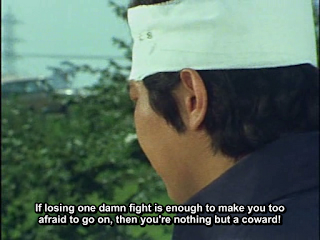 Kamen Rider episode 31:
[MKV] [Script] [AVI] [MKV Torrent] [AVI Torrent]
When Goro is injured, Hayato loses the will to fight...
But Taki and Tachibana won't let him give up that easily, and in the efforts to boost his spirits, they may have helped Hayato unlock a new special attack to help him in his battle against Shocker!

This is actually a pretty dark episode, for a story about overcoming an emotional and physical hurdle.  There are some pretty gruesome scenes, and some really creepy moments between Takeo and his brother.  On the other hand, there's a really great scene between Tachibana and Hayato that will show both characters at their strongest.  It might seem out of character for Hayato, but it doesn't feel out of place.  And we get yet another scene in the franchise where Tachibana is the emotional focal point for the story.  It's a great scene, and it almost completely overshadows Taki's "pep-talk" with Hayato.

Also: Here's some episode trivia, thanks to our friend JEFFBM -


Ichirō Murakoshi's first stint as a Monster voice, we'll hear him again later in Episode 76 and other Rider shows like V3, Skyrider (two of which have appeared in the episodes subbed so far) and Super-1 in addition to serving as the Narrator of Inazuman and Bioman. His Japanese Wiki page lists even more Toku credits than the ones I've listed.

This is the beginning of our Kamen Rider marathon, getting us to some fan-favorite episodes, and a very special milestone that we've been waiting a long time for!  You don't want to miss it. 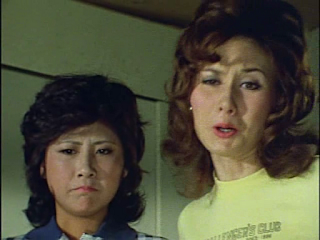 We were offline for a bit due to hurricane Sandy related issues.  Power outages, lack of internet access, and all of the mess you've probably heard about on the news now.  But we're back online, and getting things organized for our regular releases.  Check out twitter and facebook page for more information.

Anyone else on the east coast, stay safe!  Hope all is well.  We'll be back soon with Kamen Rider episode 31.
Posted by Steel A Jeeg at 8:46 PM 2 comments: