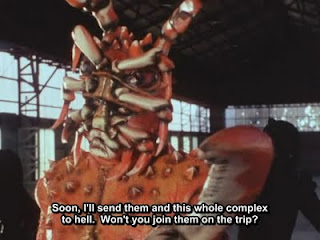 Yes, I know that I promised Kamen Rider 15 this week.  Unfortunately, we had a (now resolved) script problem and we just so happened to have a finished Skyrider script...  so here we are.
But that's ok!  Because this is a very fun episodes, and a sign of things to come for Skyrider as a show.  The tone of the show is changing, and it's starting to show its true colors as an anniversary show, as opposed to a remake of the original.  Once the first "climactic final showdown" takes place, you'll start to see it even more.

As for the name "CrabberMan," let me justify myself here.  "Kani" means Crab in Japanese, but his Japanese name is "KaningerJin."  From my understanding, "ger" in certain Japanese words (mostly of foreign origins) is like adding "er" in English; it establishes that this word is "doing" something.  Use "Toast" and "Toaster" for example, a toaster...  makes toast!  For precedence in Japanese pop-culture, look to "Mazinger."  Go Nagai once stated that the name was originally supposed to be reminiscent of the word "Majin" (or evil person) and have the sense of being "capable of doing evil."  So Majin-ger would (almost) literally mean "One who does evil."
That, and I thought that CrabberMan sounded silly.

WELL, that rant was long!  Kamen Rider 15 is DEFINITELY coming next week.  Thanks for watching, everyone!
Posted by Steel A Jeeg at 9:45 PM 5 comments: 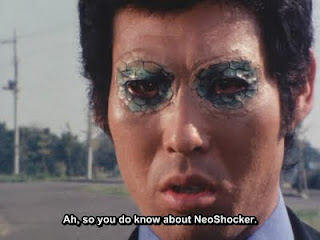 This week's episode...  is not the second part of Kamen Rider 2's debut.  Sorry.  However, instead we have a really great new episode of Skyrider!  CobraMan gathers up world class athletes from all over the world (Japan) to assemble "History's Greatest Murderous Army."  Whatever that means.  In the process, we get a really great "Dojo-Killer" story, some great martial arts scenes, and the baddest of the bad human forms a NeoShocker monster has EVER had.  This guy is pretty slick!  I can't find any information on the actor that played CobraMan's human form, but if anybody can find anything, let me know.  This guy is awesome.

UPDATE:  So UK Windom posted this on /m/, in reference to the actor that portrayed CobraMan's human form.  It turns out...  He's a Kamen Rider LEGEND!  Check after the cut for more.

Check after the cut for episode Trivia! 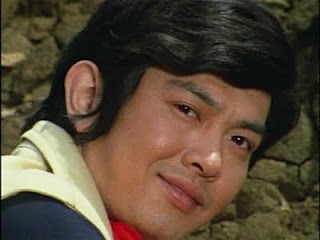 This is a pretty monumental episode.  We not only have the introduction of Kamen Rider 2, we also have a new opening (with new vocals, by Masato Shimon, who has been the singer for the ending theme since episode 1) a new ending, three new girls, Tachibana's racing club, and the debut of the "Henshin Pose!"  That's right, the first character to pose while transforming was NOT Rider 1.  The pose itself is explained in greater detail later on, but for now it's just another indication that the show was evolving.

And it is a much better episode than the last handful of Fujioka-less Rider 1 eps.  Don't worry, we'll hear about Hongo every so often.  And he's back for good in episode 52.  For now, we can all enjoy Rider 2's arc, and the awesomeness that is Hayato Ichimonji.

Do you want to play a fun game in this episode?  In the second half of the show, try and see how many times Rider 2 is riding the Cyclone 1 instead of the Cyclone 2.  It happens quite a few times!  While it's never officially called the Cyclone 2, it's Ichimonji's "offroad" mode for the Cyclone.  It's much thinner than the original.  There's never any transition shown, this episode.  It's just... there, sometimes!

Next week, we'll have Skyrider 09, and the week after that Kamen Rider 15.  That's a little cruel of me...  you'll understand why, after you watch this week's episode!

Also, many of you seem to like my trivia posts on the blog, facebook, and twitter.  If you're interested in more detailed background information, check out our release thread on the /m/subs forums, where user "Scissors Jaguar" (Or, 鋏ジャガー, actually) has even more extensive information on these episodes than I could ever HOPE to have.  I'm truly jealous of his skills! 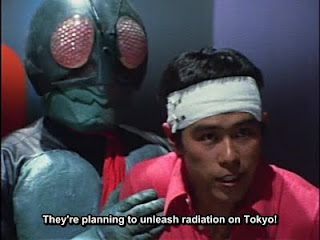 Well, this is it.  The last Hongo episode for a while.  Don't worry, he'll be back.  Next episode is the debut of Hayato Ichimonji, Kamen Rider Number 2!
However, we're losing Ruriko this episode, too.  Her disappearance is mentioned briefly in the coming episodes, but it's hardly a proper send-off for the character.  I'll really miss her, she was my favorite supporting cast member next to Tachibana.  If anybody knows the behind the scenes reason why she left, let us know!
Also, this episode is the official debut of Taki, and he finally joins the show as a regular cast member.  Check out the trivia at the bottom of this post for some pretty cool background on Agent Taki Kazuya.

If you've been putting off watching this show until we're "done," you should actually take this opportunity to watch the first 13 episodes.  They represent a story arc that's fairly self contained, and has a pretty neat and tidy ending.  The next arc focuses on Rider 2's story, and after another 13 episodes a new arc will begin.

Some trivia about this episode:

If you think this episode looks familiar, that's because it was released in theaters as the first Kamen Rider movie.  It's identical to this episode, just cropped for widescreen projection.  Ironically, the TV version seems much more cinematic than the theatrical edit.  It's a boss-rush, Kamen Rider versus every Cyborg monster he's faced so far, and one strangely out-of-place new threat.

Lizardron's human form, Ken Nomoto, is played by Shinzo Hotta.  You might recognize him as General Monster, from Skyrider!  He might be a little hard to recognize out of makeup, but that voice is pretty distinctive.

Agent Taki Kazuya is played by Jiro Chiba, who also played a detective in Robot Detective K, another great Shotaro Ishinomori tokusatsu show.  However, what you might not know is that he's action movie super-star Sonny Chiba's younger brother!  That's a pretty substantial legacy for an action star!
Posted by Steel A Jeeg at 11:35 PM 4 comments: