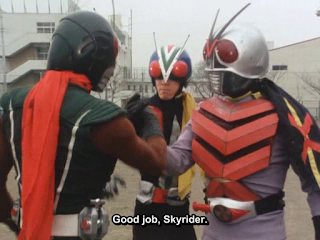 ddl links up!
As much of a spoiler as that picture looks like it is, it really isn't.  This episodes is played for jokes a lot of the time, and the whole thing just seems like filler.  Granted, it's filler that builds up to next episode (which, if you stick around for the next episode preview, you'll see why that's so cool) so we can forgive it.

The story here is really all over the place.  NeoShocker plans to unleash a viral epidemic.  But also they want to turn schools into fortresses to surround Tokyo.  We see AntCommandos acting silly, Hiroshi fighting with chains (more than once) and X and Riderman teaming up for no apparent reason whatsoever.  But it's all in good fun!  And the fight scenes in this episode are top notch.

And, like I said, next episode is going to be a big one.

BUT, we'll have to wait on that one.  You guys know how much I like to prolong the wait on these milestone episodes.  So next week's episode is Kamen Rider 27!
Also, check back in here soon for some news on one of our joint-release projects with Midnight Crew Subs.
And thanks for watching, as always!

Monster Name Trivia Time!
This week's monster is "Dokuganba" in Japanese.  You might recall that we've already met a few DokuganDAs recently, between Kamen Rider and Stronger (with Midnight Crew Subs)
The only difference here is that ba syllable.  Normally we'd translate the name to ToxicMothra.  The reason being that the DA sound is just a sci-fi-make-em-up sounding syllable.  And of course a dokugan is a poisonous moth.  But here, there's a pun at work.  The ganba here is short for "ganbaru," which is a common japanese phrase you've probably heard in a million different places.  With the help of the crew in #sht we tried to figure out what the pun could possibly mean (a hard working moth?  a moth made of rocks?) until it finally dawned on me.  It can also mean "endure," and tonight's episode is about another poisonous moth... but THIS time the toxin is contagious.  So an enduring toxin... like an epidemic!  Which is exactly what this episode is about.
Being a vocabulary nerd, I went with "MiasMoth." Because of the amorous affect of alliteration, and also because miasma is my favorite obscure word for a viral outbreak.
THE MORE YOU KNOW!
Posted by Steel A Jeeg at 3:03 PM No comments: 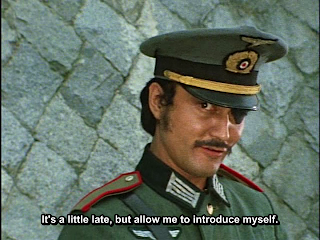 Before we say anything about this release, I have to give a HUGE thanks to HeatMetal from Over-Time, for helping us TL check this script.  He did quite a bit of editing too, and I was really happy having his input on some tricky dialogue!  Those boys (and girls) do some good work, so be sure to go check them out for some SPACE-TIME when you get a chance.

This episode is a doozy.  It might not seem like it at first, because AntHellstorm (while hilarious looking) doesn't really do much.  But that's not the point of this episode.  We quickly realize that the REAL purpose of this episode is to introduce Shocker's first commanding officer... Colonel Zol!

Those who have seen All Rider vs. DaiShocker might recognize this as the guy that Narutaki turned into when whatever-the-heck-was-going-on happened.  But the real Zol is so much more awesome than that.

Played by Jiro Miyaguchi (real name, Akiyama Tadafumi) Colonel Zol really reminded us that Shocker was made up of the ancestors of Japan's Nazi army.  His calculating expressions and razor sharp uniform would become the epitome of a Shocker commanding officer.
Miyaguchi would return in Kamen Rider V3 to reprise this role, and he guest appeared in some other tokusatsu shows of the era.  Including episode 6 of Kikaider 01 as Red Centipede.  He was more well known for his roles in procedurals, and period dramas.  He passed away in 1995.

So with this, we see the beginning of a new arc for Kamen Rider.  The show will shift more from a monster-of-the-week brawl fest, and we embark on Hayato Ichimonji's battle to take down the fist Shocker commanding officer that we meet.

Thanks for watching (remember to keep those torrents seeded!) and we'll be back next week with one of the MANY new episodes we're working on.  Check the status bar for an idea of just what we've got on our plates for the coming months.
Posted by Steel A Jeeg at 8:16 PM 5 comments: 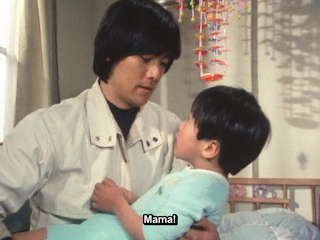 WATCH THIS EPISODE.
Yes, it looks silly.  Yes, it starts off silly.  But it's going to make you love Hiroshi as a character so much in the end.  Even I, someone who brushed this episode off as useless filler, was completely absorbed by how INSANE and DARK this episode got.  It's definitely a Kamen Rider episode that will go down in history as being one of "THOSE" episodes.
And if you feel nothing by the ending, then you are no friend of justice!

Things are running pretty smoothly for now, knock on wood.  Torrents are working well, DDLs in both locations are stable, and we've got more people watching than ever.  Thanks for all of your support over the past few weeks!

Actually, while we're here, I want to remind all of you to refresh the trackers on our torrents if you're currently seeding.  NyaaTorrents had a little bit of a change in their policy (it happened days ago, you probably didn't notice) and they changed all of the trackers on their torrents.  So if you're currently seeding one of our torrents from last week (or the week before) then go to our downloads page, and just redownload the .torrent file for the batch you're seeding.  You won't need to re-download all of the episodes, just that first tracker link.  It would be a HUGE help for us. 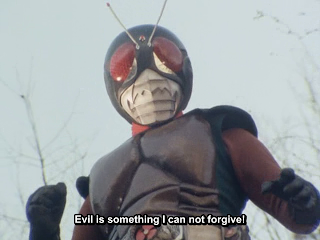 This release post might seem a little rushed, because I've been incredibly busy with KITsubs stuff this week.
For this release, we have Skyrider 24!  In this episode, a disillusioned scientist is a jerk to his little sister.  But that's ok, because she starts hearing voices due to the horrible way he treats her.  No, seriously...
Skyrider won't stand for MosquitopoxMan's plan to poison all of Japan, and exploit the work of an emotionally unstable young scientist.  This is one of the best Skyrider episodes we've released, trust me!

So, you want to watch Skyrider but you haven't seen ANY of it yet?  Well, remember what I said about being busy... tonight, we ALSO have batch torrents for ALL of Skyrider.  Everything we've released so far.  Tonight's episode is included in the Episodes 13-24 batches.  There is no individual torrent for episode 24.  If you want to download that episode by itself, just get the batch torrent, and uncheck all of the episodes you DON'T want.  See, it was simple!

Also, also... speaking of busy again, everything is back online.  Over the course of the evening, I'll be adding links back to our release page.  I've reuploaded everything.  From Skyrider and Kamen Rider, to the one episode of X that we did, and the Hibiki episodes.  It's all back online.

BUT... if you should ever come across a dead link, then KRDL.info is hosting ALL of our regular series releases.  All of them are online right now, and new episodes will be added a day or two after they show up here.  If you're ever missing an episode, and the link is dead here (or you want faster download speeds,) then you can always find them at KRDL!

Jeez, that's a lot... it's been a busy week.
Come back next week for another episode of Skyrider!  Probably one of the most bizarre, and potentially emotionally scarring, that you've EVER seen!
Posted by Steel A Jeeg at 7:30 PM 5 comments: