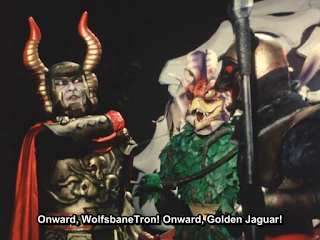 This is a bit of a truncated release, so please forgive me.  I'm at NYCC this weekend, so if anyone else is attending, please feel free to come say hello!  But that means I have, like, two seconds to update things.  Ooops!

So, this is a fun episode.  Fun being the key word here...  it's the first half of a two-parter, and has a very different tone than we've seen before.  It's hard to pinpoint, but there almost something tongue in cheek about this episode.  But on the other hand, there's a lot of cool stuff.  Great location shots, the appearance of Golden Jaguar, a battle on horseback... and the appearance of a very cool cameo.

It was especially fun for us, because this cameo just so happens to come from KITsubs very first project together!

Before I go, have a fun fact:  The villain this episode is called "Torikabutoron"
As you can see above, I went with "WolfsbaneTron" for the translated name.  Torikabuto is the Japanese name for Wolf's Bane, a particularly toxic plant that our monster of the week just so happens to look like?
But what else does he look like...
Tori Kabuto can also be translated as "Bird" and "Helmet."

And speaking of which, have fun with this episode!  We'll see you next week.  And if you're in New York for the convention, I hope to see you there!