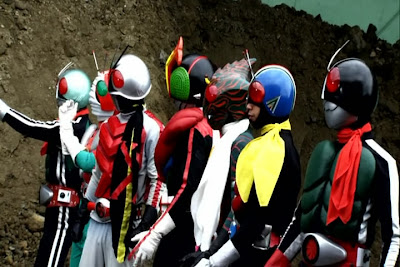 This is our "secret" project along with Over-Time.  Was it really such a secret, though?

The Seven Legendary Riders are in trouble.  The world's newest evil secret organization, Foundation X, has aided in the research on some of the most powerful technology known to man.   Gaia Memories, Medals, Astro Switches...  When one rogue takes that power to use for himself, their power won't be enough.

The current generation of Riders will have to team up if they want to defeat Foundation X.  In the tradition of the Kamen Rider crossovers from the classic era, these four heroes will team up to take down this new powerful enemy.

Mega Max is seriously entertaining.  It has some of the best fight scenes we've seen from Kamen Rider in a while, thanks to the directing of Koichi Sakamoto (Kamen Rider W Forever: A to Z/The Gaia Memories of Fate, Mega Monster Battle: Ultra Galaxy) one of the most talented Tokusatsu directors in the industry.  That's a big statement to stand behind, I know.  But watch it and see for yourself.  There is a cinematic feel to this movie, a larger than life scope, that most Kamen Rider films are sorely missing.

However, a word of caution... if you have ANY interest in OOO, don't watch this movie until you've finished that series!  Mega Max takes place in continuity, following end of OOO's story.  There is a pretty big spoiler involved at the core of the OOO portion of this movie.  If you don't mind, or if you've already seen OOO, then proceed.  But if you think it won't be a big deal.... trust me, it kind of is!
And yes, that pun was intended.

Thanks for watching, as always.  We'll be back in a few days with Kamen Rider 28: The Subterranean Monster Molerang!
Posted by Steel A Jeeg at 1:44 PM