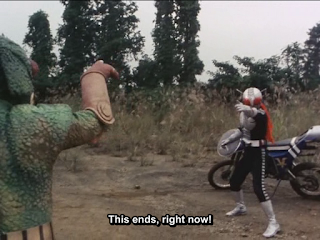 It's been a while!
This is the type of story where Super-1 really excels.  A melodramatic drama between siblings; Ninjas; Crazy Kung-Fu styles; Terror Macro waxing ominously poetic about his crazy plans...  it's so much fun.  There's a really great fight scene about half way through the episode that gets particularly intense!

This episode took us a lot longer than we expected.  It was originally planned for the 1-year anniversary since we put the show on hiatus, but plans fell through.  Then it was put on the back burner for a while.  Sky sent me the complete script for this ages ago, and it only recently finished the TL check process.  We still plan on getting more out eventually, of course.  And it will definitely be at a better pace than this!

We'll be back sooner than usual with Kamen Rider Stronger 27, along with Midnight Crew Subs.  After that, we still have a regular release for next week.  Thanks for watching!

I also want to say thanks to one of our followers on the Facebook Page, Kenny Magnificent Williams, who made us this awesome poster for our group!
I love stuff like this.  It's great to be part of such an active, and creative community.  And we're happy to bring these awesome shows to a new generation of audiences!
Posted by Steel A Jeeg at 8:20 PM